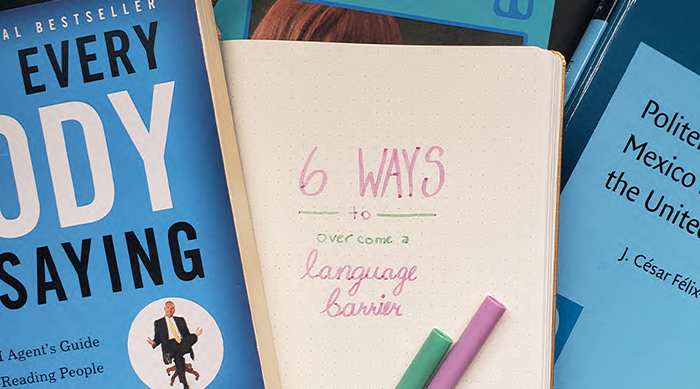 Overcoming a language barrier with anyone can be frustrating and confusing. But having language barriers to communication with friends or family and feeling powerless can be even worse.

It’s not always that the friend or family doesn’t speak our language. In many English-speaking countries, overcoming a language barrier can happen with the languages we ourselves grew up speaking at home but have since forgotten.

Some common language barrier frustrations include:

Thankfully, there are a few big steps that anyone can take to overcome to break the language barrier between anyone in their lives.

Strategies in Overcoming a Language Barrier

1. Destroy of the myth that you are “bad at languages”

While it’s estimated that well over 50% of the world’s population is at least bilingual [source], it’s common in English speaking countries to hear that it’s simply impossible for someone to learn another language because they’re “bad at it”!

Here is proof that this is a myth: I myself, a person who speaks at least 4 languages fluently and another few at a conversational level, failed out of high school Spanish as I forgot my native language. I thought it would be impossible for me to ever relearn my Spanish or Polish, never mind any other language.

“You must just have had a gift this whole time!” says the unbelieving reader.

So is it just that every citizen of Luxembourg happens to have the language gift, the average person speaking 3 languages fluently? Or that all citizens of Catalunya are simply born with the gift of being naturally bilingual?

“They started as children!” the reader continues. “I’m an adult!”

You’re right, reader. You’re an adult who the system has failed.

But don’t lose hope: with good resources and some consistency, there are more and more studies that show that the adult learner actually has many advantages over the child learner. It might actually be easier to learn languages as adults than as children under the right circumstances.

This doesn’t mean that you must learn a new language to overcome a language barrier. It just means that if you wanted to, and had good instruction, you could.

If learning a whole language looks impossible, don’t worry. An easier way to start overcoming the language barrier is simply by learning about body language.

Let’s play a game: I list a movement that the body makes, and you guess whether it’s cultural or universal. (Cultural means that only people where you’re from can understand it. Universal means any human ever, even if they grew up 3000 years ago on a different continent, can understand it.)

The answer is that almost all specific movements we make to stand in for a word (such as shaking your head to mean “no”, giving the a-ok sign to mean “good”, waving to say “hello”) are culturally specific.

However: emotional signals are thought to be universal.

In fact, understanding the differences between these two types of body language is the fastest way to break down a language barrier!

You can read more about the 7 Universal Facial Expressions here, but if you’ve ever tried to nod your head “yes” to a south-Asian coworker or accidentally made the a-ok sign to a French friend, you’ll understand that we don’t all use this signs to mean the same thing.

The books I recommend on the topic are:

We communicate in many other ways that have nothing to do with language or even body language.

The Five Love Languages is a well-known pop psychology book that says every human has ways they express love. Makes sense, right?

Thing is, we may have very different ways of expressing our feelings.

[Source] Words of affirmation can be anything from sweet whispers to verbally congratulating someone on a work project. Acts of service might be helping them with errands, cooking for them, or even helping them with a DIY project. All 5 of these “love languages” are quite varied (and have many subcategories) but you can see the idea.

My personal love language is cooking for people. It didn’t dawn on me until discovering that there are other love languages that my friends might just want quality time, or that when someone asks me for help with a small thing they’re actually asking me to express that I care for them.

Once you’ve figured out your own love languages, try seeing how someone else acts to express their affection for you.

Did they get you a small gift? Help you carry something into a different room? Do they spam you with memes?

If you can find their love language, you can express how you feel about them as friends or family without ever using a word in any spoken language.

“Language is the only thing worth knowing even poorly.”

Words like thank you, you’re welcome, please, and happy birthday (if they can be translated directly into that language) can mean a great deal–even if the language you normally communicate with is English.

Why not just learn a few little things to show someone that you care, and that you really do want to have a conversation with them, even if you can’t right now?

To make sure you’re saying the phrase correctly, one of my favorite things to do is to simply go onto any hashtag for your language on Instagram or Twitter that would help you. If you’re looking at Spanish, you might try #Spanishteacher #Spanishclass #learningSpanish and try to find a Spanish teacher.

Don’t ask them to do the work for you, but come to them with a translation, explain the situation, and ask them to confirm your translation and pronunciation. If it takes them less than 15 seconds to help you, I’m sure they will.

Trying to communicate in Yucateca Maya, Malta, or something else that’s hard to find online?

Try a moment of humility and ask the person you’re trying to communicate with: “How can I say [word or phrase] in your language?” when the time is right.

Write it down and memorize it. Build yourself up a small dictionary of phrases or use an app like Anki to help yourself memorize them and–even if you can’t express complex thoughts–express the emotion behind what you’re trying to say. 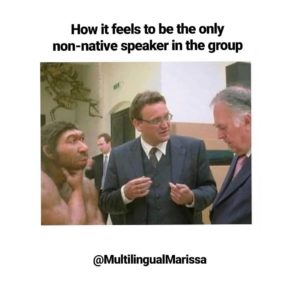 And if you already speak some of their language, but are still suffering from a language barrier, building phrases or scripts for specific situations is one of my favorite things to do.

With my French-speaking friends, I found out quickly how important food and talking about food was to them.

So I took a few private classes online just to talk about food and cooking, memorized new vocab, and practiced journaling about what I had eaten on weekends.

I came out with not only new individual words but huge phrases I robbed from Foodie YouTubers to express how liquoreux the wine was and talk about comme la crème au caramel était.

Simply learning whole sentences directly from native speakers instead of trying to reinvent them yourself in anticipation of certain situations can cut down immensely on language barriers to communication when you need to speak about something specific.

5. Try learning any language at all (even if it’s not theirs) so you learn how to speak clearly 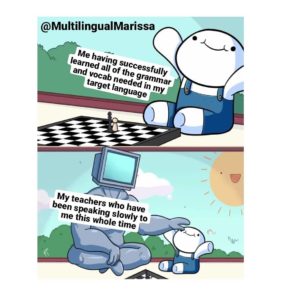 If you’re speaking in the dominant language (in the US or Canada, English) it can be hard to gauge whether or not a second language speaker can understand you.

Many second language learners (including myself) will often pretend we understand a sentence or even a whole conversation to put the other speaker at ease.

Unfortunately, this doesn’t help anyone.

If you’re impulse IS. TO. TALK. LIKE. THIS. I would like to offer you a better idea:

Learn any language whatsoever, even if it’s not theirs, just enough to understand some of it.

Speaking “clearly” has little to do with volume or sud.den.stops.be.tween.syla.buls. SPEAK ING LIKE THIS MAKES THE CON VER SA TION UN COM FORT ABLE FOR EVERY BODY.

Instead, here are some of my favorite tips for speaking clearly. I know this because this is how I really really appreciated people speaking to me in my other languages. (Especially when I was just getting started in those languages!)

And like I said: if you learn any language at all, you’ll learn naturally how to make your own English more clear to other people.

6. Learn their language (the ultimate way to break a language barrier)

Just because you can learn a language doesn’t mean you have to–especially if you’re battling feelings of guilt or shame because the language you’re trying to communicate with is your ancestor’s language.

But if you want to learn (or relearn) a language, this site is full of articles written with care about the languages we forgot and how to relearn them.

A few that you might find particularly helpful are:

I also invite you to follow me on YouTube. You’ll get regular updates, product reviews, and learn more about language learning in general.

Finally, is there any particular question you have that this article didn’t answer? Leave it in the comments below so I can make sure there’s nothing I missed and come back to expand it later!