SPANISH GENDER: Masculine, Feminine, and Beyond 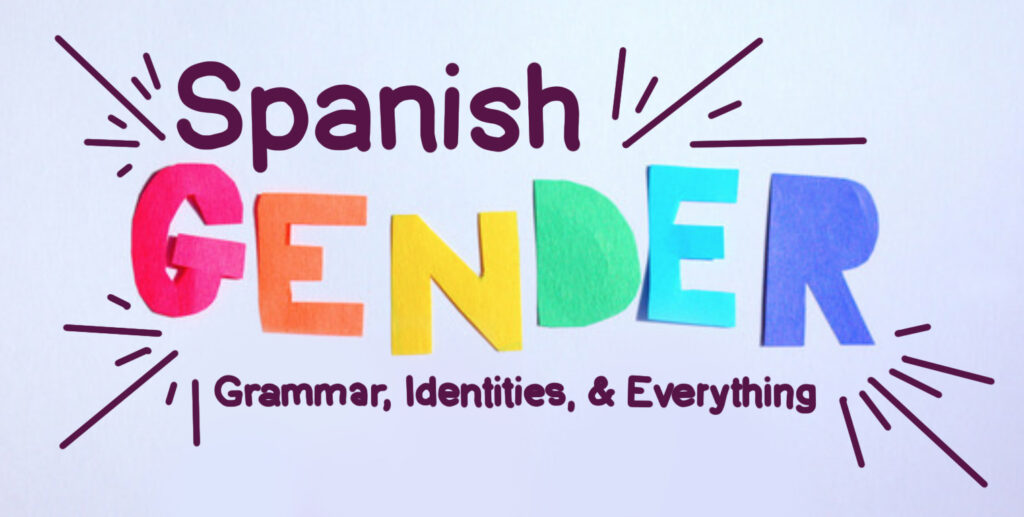 Spanish masculine and feminine grammatical gender is often taught with a “don’t think about it too hard” attitude.

“Just memorize” noun gender as a student because “that’s just the way it is, but it’s not sexist”, right?

But if you’re a Spanish student or heritage learner (especially if you’re a woman or queer person) Spanish grammatical gender can be extremely frustrating.

Welcome to the internet's first comprehensive guide to Spanish grammatical gender beyond the masculine and feminine binary!

Because why just memorize some rules when you could explore and have fun with language learning?

Want to know more about feminist and queer options in Spanish? We gotcha covered.

ADVANCED: Beyond the Masculine and Feminine Gender Binary

Go beyond grammar and beyond the gender binary. Perfect for intermediate or advanced students!

A quick background about me, the author and curator of this list.

I’m a queer person, Polish heritage language user, and fluent Spanish speaker. My first frustrations with translating my identity between languages and cultures were in English and Polish, but the first time I felt like I could successfully navigate those differences were between English and Spanish–despite how the Spanish masculine and feminine binary could sometimes grind me down. 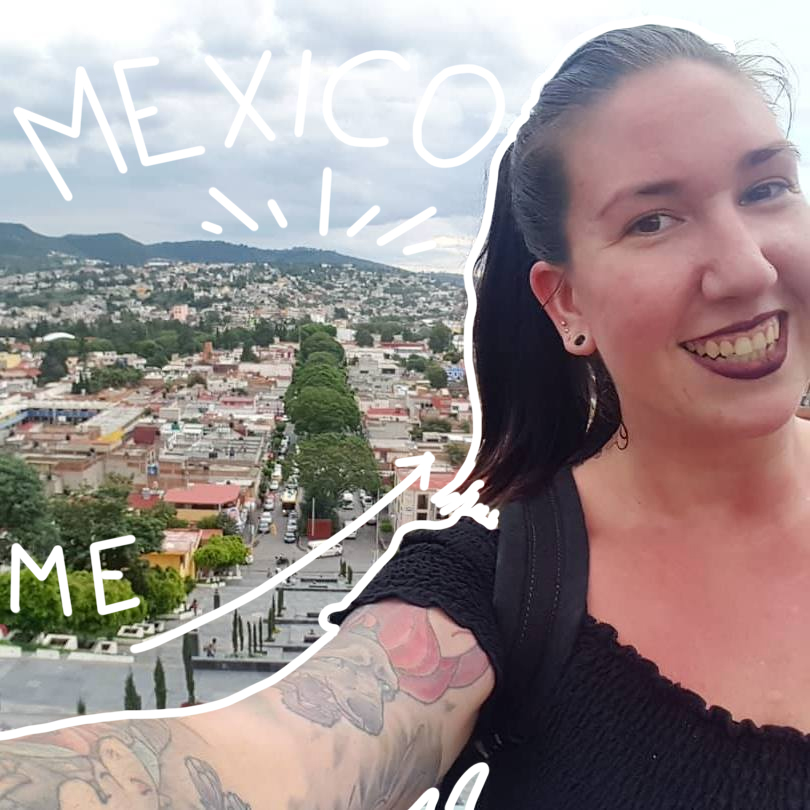 This article about Spanish gender will be written for language learners and speakers for all levels, but will make a special point to address people in the Americas because of the intimate convivencia Spanish and English here.

I hope it’ll quickly help beginner Spanish students understand the concepts of grammatical gender, but then help the rest (and most curious) of us go beyond the Spanish masculine-feminine narrative.

First, let’s get it out of the way. The thing you’re probably searching for.

Here's the easiest explanation online so you can start identifying if a Spanish noun is masculine or feminine.

Whyyy are nouns either masculine or feminine in Spanish?

If you want to learn more about the benefits that grammatical gender has for language acquisition in babies and children this research article is pretty thorough.

But where did Spanish’s grammatical gender come from? Here’s a great video that uses a bit of German as an example.

So while the Spanish masculine feminine grammatial gender construction may be annoying for those of us learning the language, they’re not as annoyingly useless as you might think!

But no matter how neutral all of those videos made grammatical gender sound…. can grammar be sexist?

Now: languages are human-created things that are reflections of the living, breathing people who live in them.

So no matter what you’ve been told in class, humans established the written rules of Spanish grammar and made conscious decisions about gender. (Someone had to decide that in a group of 248098 women and 1 man, we have to use the masculine right?)

Now: are you interested in changing how you speak Spanish to promote gender equality?

Inclusive Spanish, sometimes known as español no sexisto, is an awesome option for Spanish language learners who want to think and speak consciously.

Swapping the normal -a or -o endings of a work for -e when referring to a group is the easiest way to neutralize your Spanish.

Here’s how it works:

On top of polite and neutral changes (again like nosotres, elles, or les amigues) the singular elle is slowly becoming adopted by media as a translation for the singular English “they” when referring to a nonbinary person.

Most notably, the New York Times and Washington Post have added elle/elles into their Spanish style guide for exactly that purpose. (Check out the third segment of this episode of El WaPo podcast for more.)

However, words like “les cocineres” or “les compañeres” aren’t in any dictionary.

So what do everyday Spanish speakers think of the change? Here are some street interviews:

So if you’re feeling confident, go for it! But depending on your level of Spanish (and who you’re speaking to), just know that you might be corrected.

Next let’s explore the term “Latinx”, as well as accompanying language features like “ellxs” (ellos/ellas).

Because while the term “Latinx” has grown in popularity over the past two decades, it has a particular stigma around it.

While around 25% “hispanics” living in the US has heard of the term Latinx, the fact that less than 3% use it [source]. It’s also used less outside of the US than it is domestically [source], so Spanish speakers of all backgrounds may push back against the term [source].

But let’s learn a bit more about why it’s worth defending in the context of Latinos, Latinas, and Latines living in the US.

If you want a well-cited history of the term, I highly suggest this paper by a professor at Florida Atlantic University.

But just know that while “Latinx” has an positive history, you may get some pretty gnarly backlash from it in public forums.

It’s also a bit clunky to pronounce, so while popular online it doesn’t seem to be gaining the same popular traction as the -e ending.

In English, hearing a phrase like “congressmen and women” in a political speech might not be cause for a front-page headline.

But when Spain’s future president Pedro Sánchez addressed his colleagues as “miembros y miembras”, a discourse was ignited.

This doubling-down on language to create a repetitive but binary-balanced sentence is your third inclusive grammar choice.

This new article contemporary to Sanchez’s 2015 address gives a lot of context for why this seemingly neutral way of speech is a relatively new way of using Spanish, and this dispatch from the Real Academia Española (the body which regulates the language within Spain) is the best official resource for why you’ll be hearing phrases like “ciudadanos y ciudadanas” more and more often.

The key takeaway? Although “todas y todos” (or “todos y todas”) is still far from the default way to address a large group, out of all 3 options this one is the one you’re most likely to hear in political speeches, academic lectures, or mainstream discourse.

Want to see some academic sources for all of this? Here are some really thorough ones:

That concludes our exploration about gender-neutral Spanish grammar.

In the next section, we’ll talk about moving beyond both the grammatical and social gender binary.

Not sure why you’d want to keep reading? Here’s an 8 minute TEDx about the natural beauty of queerness that will inspire you (no matter what your sexuality or gender).

3. Beyond the Spanish Gender Binary

Just like the Spanish language itself, the current gender social system we have in place in the Americas was imported from Europe.

In this section, we’ll be deconstructing what that means for those of us who live in the New World socially, both as language users and wonderfully complex humans.

Just a head’s up: the topics covered in this section are total rabbit holes. I suggest bookmarking this page and making your way through the documentaries here since they’re just a few of the dozens online and you’ll likely want to watch others too!

Dr. Gutiérrez Usillos’s lecture talks about nonbinary identities held by indigenous people in the Americas before European contact or contact with the Spanish language.

The most famous examples of pre-Colombian gender variation are the Muxe of Oaxaca, Mexico. Here’s a short documentary about their daily lives, but remember that an outsider perspective isn’t the full story.

Even outside of any number of genders and sexes, just how the current machista Spanish masculine feminine gender binary is constructed is a product of colonialism. (Irene Silverblatt’s book Luna, sol y brujas: géneros y clases en los Andes prehispánicos y coloniales is nearly impossible to find, but explores the anthropology of the binary before European contact.)

Now, let’s get back to language.

What are the terms and concepts you’ll want to know in any language in order to talk about gender and sexuality? Here’s a great 101 for Spanish native speakers (which doubles as a great guide for language learners).

There are also a number of videos by CARKI Productions which I recommend as another great starting place for an intro to LGBT+ vocabulary.

But if those videos are a little too basic for you, I highly recommend the Gay Dictionary. 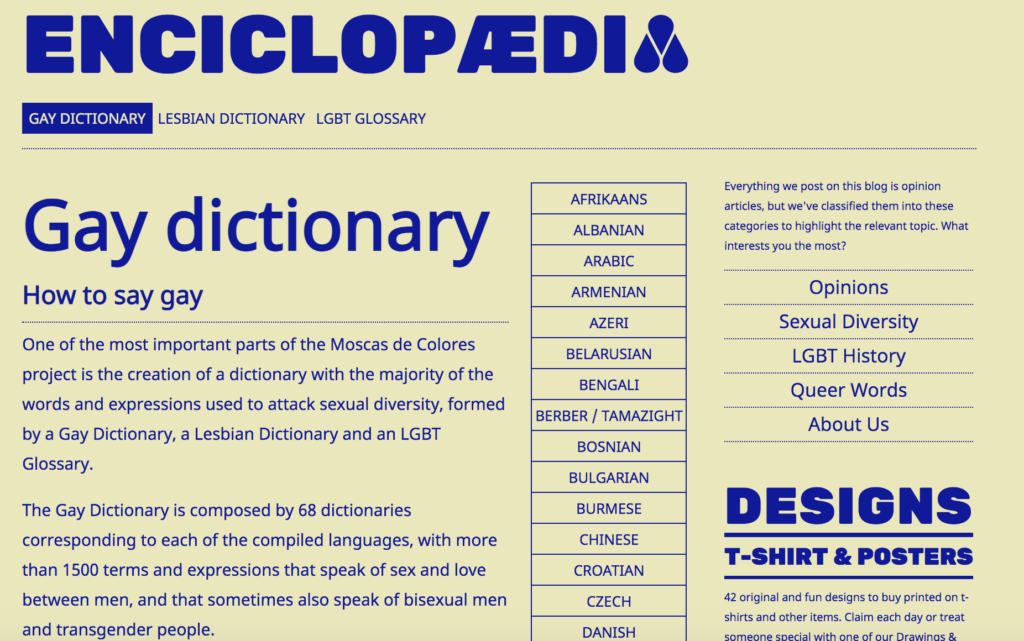 The Gay Dictionary by Moscas de Colores is an English dictionary for the many ways LGBTQAI+ label themselves throughout the world and its languages.

It’s available in an impressive number of languages and translated really, really well.

If you want a larger look at queerness and transness in the Spanish-speaking world, make sure you check out some new media.

Elsa has some great recommendations, but I would also recommend checking out the following authors:

Here are a few recommendations from actual queer people (and not just straight people write gay or trans characters).

Ártemis López is a researcher doing research on nonbinary inclusive Spanish and English-Spanish translation. Check out López’s interviews on rtve or panel interviews to learn more about this new area of translation.

(Thank you to @martinalanguagetravelling for this tip!)

And finally, because so much of our website is dedicated to heritage language users, we’ll end this section with first-hand accounts of what it’s like to be both nonbinary and Latinx in North America.

CONCLUSION: Experimenting with the Spanish gender: masculine, feminine, and beyond

Languages are living things, and they are reflective of the living people who speak them.

As a Spanish student, you yourself become part of the people who change and create the language as you speak it.

So get creative with how you express Spanish masculine, feminine, and non-binary genders.

Listen to as many gender-creative speakers as you can.

Take notes on phrases, words, and non-verbal communication that you love.

And start playing with the language!

Do you have additional resources, fun media, or helpful tips for other Spanish language students?

I’d love to hear more about what should be included in (or updated with) this article.

The goal is to create a huge bibliography for other gender creative, non-conforming, or nonbinary students–so I’d love to add more at any time! 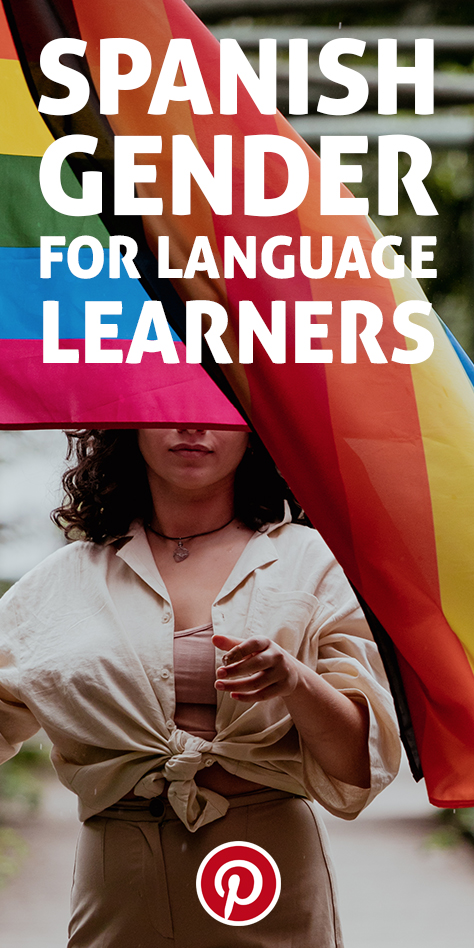