Learning French and Spanish at the same time 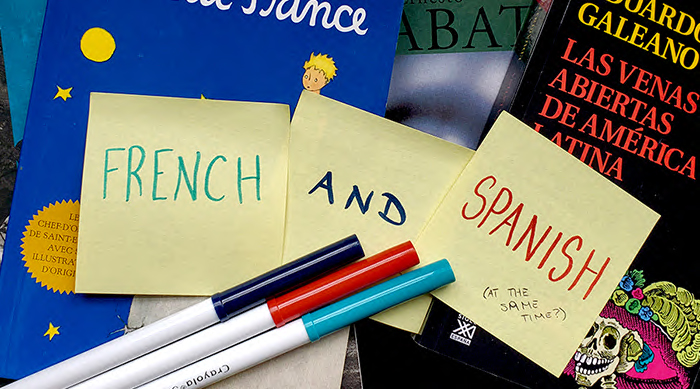 I’ve spent the last 4 years learning French and Spanish at the same time.

In this article, I’m excited to answer a lot of questions, show off some of my favorite tips, and help you learn French and Spanish together. So let’s dive in!

And FYI, some of the products that I use and recommend I now affiliate with, meaning I may earn a small commission off purchases at no cost to you.

Why I started learning French and Spanish at the same time 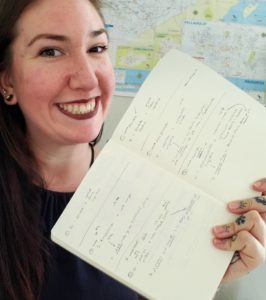 Celebratory selfie after my first combined lesson where I studied both French and Spanish together with the same teacher.

When I was younger I thought learning languages was hard–maybe harder than I was capable of.

I had been so excited to learn a new language in school, but by the time I graduated high school, I had essentially failed out of Spanish. I had also tried Polish in university but quickly gave up on that too.

Eventually, at age 27, I decided to try some language immersion school in Mexico thinking I’d give learning Spanish one last shot…

And almost like magic, learning languages turned out much much easier than I thought.

(Why is that? I’ll give away the secrets soon, but it wasn’t the immersion. Just keep reading.)

So when I finally reached my goals in Spanish, I decided to give French a try at the age of 29.

I’d always been curious, so why not give it a go?

So I did the same thing: I went to Quebec for immersion for two months to start my long (long) path to fluency.

And French Canada was amazing.

I made Latino friends who I spoke Spanish with as we studied French together. Then I made friends with one of my French professors since he was curious about learning a bit of Spanish himself.

And both of my languages continued to develop together!

The reason why I started learning French at the same time as Spanish was simple: boredom and curiosity.

And in fact, that’s why I now always study multiple languages at the same time! 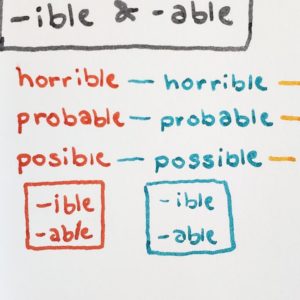 I now take multicolor notes and each language has its own color. Spanish is red and French is blue.

You know how it’s like to crave your favorite food, right?

But other times you’re hit with a craving for something totally else. Your favorite food just isn’t what you want right now.

Plus, not having your favorite food for long stretches of time can make it taste even better the next time you have it!

So what does this have to do with learning French and Spanish at the same time?

I love Spanish–out of all of my languages, it’s by far my favorite and most dear to me. 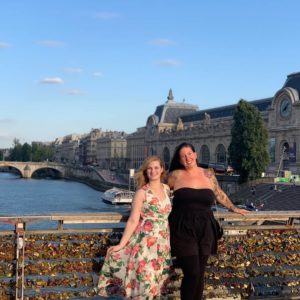 Me and my best friend in Paris in 2019, where I got to smuggly translate everything for her. Even better was dinner that night, where we met up with a friend of mine in Mexico and her boyfriend got to teach us some Portuguese. Four languages in one day!

But some Stromae? Getting my news in French? Watching a French baking show on YouTube? That sounds like exactly the ticket.

The language I pick up on any particular day is just the language that sounds the most appealing to me at that moment.

Let me be clear: some people find learning two languages at the same time overwhelming.

If you don’t feel like it’s for you, then there’s no reason to pressure yourself into learning French and Spanish at the same time.

But at the time of this writing, I’m still learning Spanish and French together after years of study–as well as maintaining my upper-level Catalan and even dabbling in a bit of low-level German.

Because my moods are constantly shifting! Learning only one language at a time would bore me to tears.

Now that I’ve made my case for why I like to learn Spanish and French together, let’s go through my tips after a few years of experimenting with learning multiple languages at the same time.

My tips for learning French and Spanish at the same time 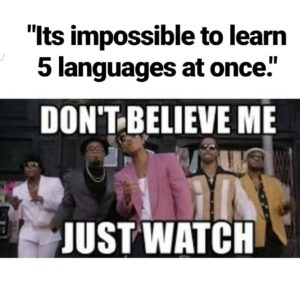 Tip 1 – Don’t let anyone scare you out of your language learning goals.

Just because someone else finds something hard (or claims it’s impossible) doesn’t mean that it is.

And it certainly doesn’t mean that you will find it impossible.

To fight other people’s anxiety and keep it from messing with my head, I had a few tools I relied on:

In the following tips I’m going to go over some pitfalls you may find when you learn Spanish and French at the same time, but before anything else: 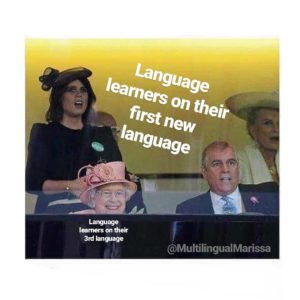 Tip 2 – Learn your first “second language” by itself. Then, trust your gut.

Some polyglots think you can only learn multiple languages at the same time only if they’re at different levels.

They think you should start one language, become extremely good at it, and then move on to another.

But I don’t fully agree.

When I started Catalan, Portuguese, and Italian at the same time I started them all the same day in the same class with the same teacher.

And I did mix them up a bit.

But with time that faded and eventually, I stopped mixing them up at all.

(We’ll get to how I stopped mixing them up soon.)

So if you want to start Spanish and French together starting on the same day, go ahead.

But I’ll add one little stipulation to that.

When I started those three languages at the same time, I already spoke two languages at intermediate or advanced levels.

That meant that I already knew myself as a language learner, so I could trust my own gut instincts.

One of the most powerful tools an adult language learner has is their gut instinct.

That “gut instinct” is the ability to ask yourself:

But you can’t know what’s working or not until you’ve cultivated a gut instinct. And you need time to work on that “I just have a feeling” feeling.

If you’ve never sat down to study a language as an adult before, and gotten to at least the intermediate level, my advice is to do that first with one language alone. (This includes people who were born bilingual and speak two languages but have never studied a new language.)

It’s a good investment of your time and will give you metacognition superpowers so that when you want to learn two (or three) languages at the same time you’ll be able to.

Now, this doesn’t mean that you can’t learn Spanish and French at the same time if you’ve never learned another language before. (Don’t let anyone, including me, scare you.)

Just that it will be a bit harder for you, and the frustration might cause you to quit. 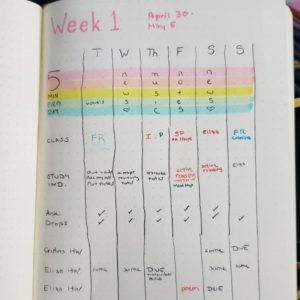 This was my original schedule when I was learning 3 new languages at once (Italian, Catalan, and Portuguese) while maintaining Spanish and French.

One of the biggest problems you will encounter learning multiple languages at once is going to be fitting them into your schedule.

Think about it–a lot of people can’t find time to study one language.

And the time for two?

Here’s my golden rule for learning multiple languages at once:

Find a good time of day when you’ll never be interrupted and when nothing else will come up. Find a way to chart and track how much time you’re putting into each language.

It doesn’t have to be equal–I certainly put more effort into my Spanish than my French, which is aligned with my priorities.

But deciding what you do with your time and how you divide your time between the two languages does have to be intentional. 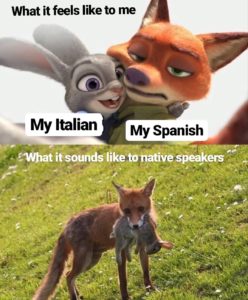 The problem most people talk about (and, truthfully, the hardest thing about studying two languages at the same time) is mixing them up.

Your poor overworked brain is trying its best… but it can’t seem to figure out what these new words belong to.

Is all this new vocabulary from another language? Is it two different languages? Part of an existing language you already have?

This is especially true for learning French and Spanish together because you have to remember if nearly-identical words like problemente or le weekend are Spanish or French (or maybe just English).

Here are a few ways you can help your brain separate the two languages:

Now let’s look at another grew way to separate your two new languages while speaking. 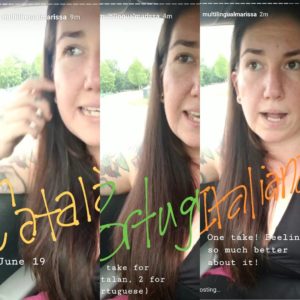 When I couldn’t find someone to talk with, I would post videos of myself speaking multiple languages together on Instagram, even if I only had a few minutes in my car while waiting for something.

Now: the hardest part is going to be not mixing up French and Spanish while speaking.

We already covered how to separate some of the vocabulary and grammar, but what about in conversations in the real world?

Just like I find studying French and Spanish back-to-back really helpful, I also find speaking them back-to-back helps a ton.

Here is how you can practice speaking Spanish and French at the same time:

Now, if you’re taking classes in school or university you might think that you don’t need to hire an extra teacher or find a language exchange partner.

But if all you’re doing is learning grammar rules and vocabulary blocks without any conversation practice, I can promise it will all blend together without some extra help.

So let’s look at my last tip, which anyone in any situation can fit into their language learning life. 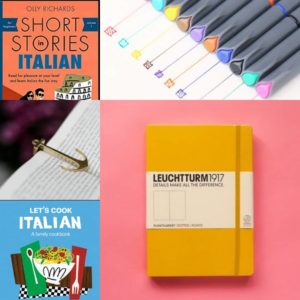 It’s okay–neither can most language learners.

In fact, many of us haven’t ever even been to a place where they speak the languages we love.

It’s expensive, and we have other priorities.

But if all you do is study grammar rules, your French and Spanish will blend together into one jumbled mess.

Here are a few ideas for how you can do French and Spanish at-home immersion. 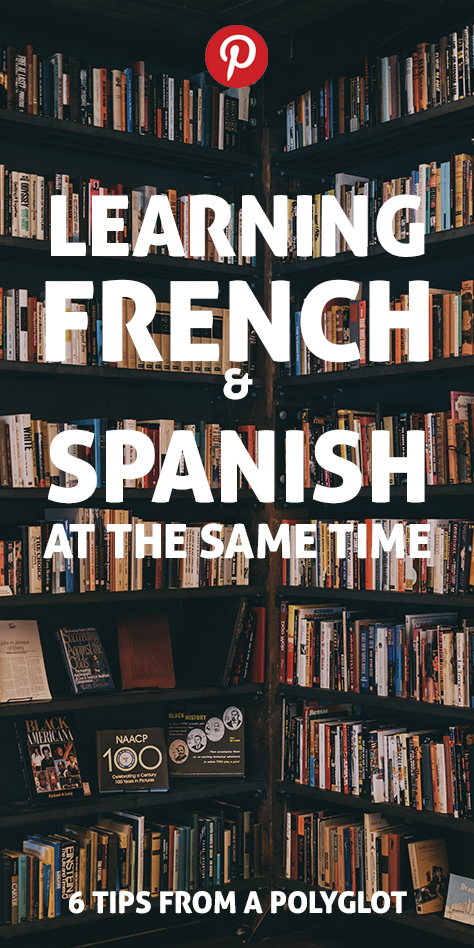 So how do I suggest studying French and Spanish at the same time?

Here’s the quick check-list to recap the most important parts of what we just went over.

Do you have any tips for learning French and Spanish at the same time?

Leave them in the comments below. I’d love to see them, and so would future readers!