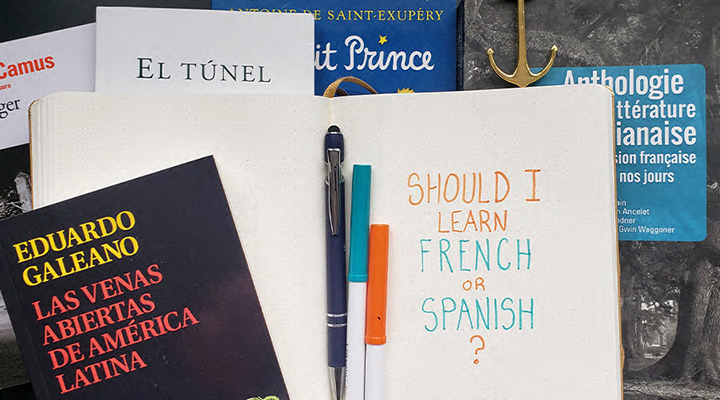 If you’re trying to decide if you should learn French or Spanish, there is sadly no easy answer (and googling “Spanish vs French” will mostly just lead you to websites trying to sell you classes.)

Week 1 of trying to learn Spanish back in 2017. I spent most of that trip crying over grammar, with some food breaks in between.

But don’t worry: I feel your pain because I personally failed out of language classes in high school.

So how does that make an expert?

Because I managed to learn both French and Spanish as an adult, as well as a handful of other languages.

I’m not trying to sell you anything (unlike most other language sites) but if you find this article helpful, send it to some friends on social media who are wondering the same thing. We’ll call it even.

To do this quiz, get a piece of paper and make two columns: one for French, one for Spanish.

We’re going to make some tallies under those to collumns for each question and total them up in the end. Super easy, let’s begin:

1. Are you interested in learning either French or Spanish?

First thing’s first: if, in your heart, you want to learn Spanish or French then that is the language you should learn.

As far as difficulty goes, they are basically identical. So if you are genuinely interested in one of these language then it will be significantly easier to learn than the other.

I’m going to go into some linguistic reasons why one might be easier than the other. But let me tell you how much actually wanting to learn a language is the absolute solution to the question Should I learn French or Spanish.

If you want to learn one, you don’t even need to continue with this quiz.

However, if you have no strong preference, just leave your sheet of paper blank. 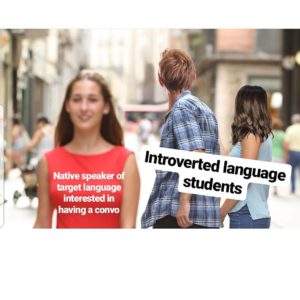 If all you’re doing is studying grammar, languages are really hard to enjoy.

But when you do fun activities in a language, it can not only reinforce your learning but make the boring grammar study worth it.

Let’s take a look at which language might be better depending on your interests.

You can’t truly simplify French vs Spanish into Introvert vs Extrovert, so I’m trying to avoid that. But at least here you have a few ideas of how you could actually use fun activities to learn (instead of just frustrating yourself with grammar books).

For this quiz, pick your top activity out of those 4 and give that language a +1 mark in that column of your paper. (Although you might see how should I learn French or Spanish this is a bit more complicated now.)

We often think of the US as an English-speaking country (even though it has no official language). And then we think of Spanish as the second most common language after that.

Well, it’s a bit trickier than that.

For this question, we’re going to assume you live in North America (sorry Europeans!) to simplify things. But you can do this with your own region as well.

I know you might be thinking “this has nothing to do with whether I should study French or Spanish” but trust me. I cannot stress enough that if you actually want to get something out of language learning, then you really have to connect with the language.

Where French is historically spoken 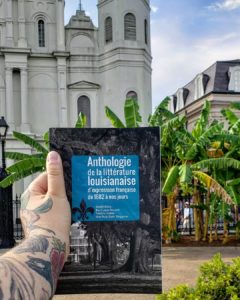 Taken on my last trip to New Orleans, where I was able to do French immersion inside the US

All Canadians (and hopefully some Americans) will know that Canada is a bilingual country, with French spoken largely in the Providence of Quebec and throughout the country in smaller pockets.

But just like the French settled in the northern part of the continent, there were also large waves of colonizing or migration in:

In fact, in Maine and Louisiana there are still large groups of francophones (people who speak French as their family’s language). They have been on this continent just as long as English speakers!

If you’re interested in discovering a local language and you live in one of those areas, you might be surprised as to how much French you can still find there.

Where Spanish is currently spoken

It’s no secret that Spanish is by far the second most-spoken language in the US! In fact, parts of the present-day US used to be Mexico:

And continuing the American tradition of migration across borders (or having borders cross them) we also have huge populations of Spanish speakers in:

Learning Spanish in those areas can be massively helpful not only in getting a job in the future but making friends and being a good neighbor.

Where both French and Spanish are spoken

Did you know Miami-Date County, FL has three official languages? All government publications (from their websites to public signs) have to be in English, Spanish, and French Creole (the contemporary language based on French and spoken in Haiti).

In Montreal, Spanish is also climbing quickly to turn North America’s favorite bilingual city into a trilingual one.

If you’re lucky enough to live in Miami or Montreal, you’ll find no shortage of neighbors to speak to in either language.

For this quiz, if you live in one of the above-mentioned areas and meeting other people sounds fun to you, add a +1 to that language. If you don’t live in any of those places; live in a trilingual area; or don’t care, you can leave this blank.

There are certain sectors in which whether you should learn French or Spanish can make a huge difference.

Here is a quick and easy list of industries, with one or both of the languages listed.

For the quiz, pick the industry you’re most interested in and use that as your point for this section.

Marketing – Spanish. The Spanish-speaking market is the fastest-growing market in the US and Canada, although if you live in Canada many regions must provide services in both English and French. (So for this give Spanish a point, but if you’re leaning towards French and live in Canada, you can give that one a point).

International Policy and Government – French. While the Spanish populations are severely underserved in the US and Canada, French and English are the two official operating languages NATO, the EU (alongside with German), and the Olympics committee. They’re also the two national languages of Canada, and are bilingualism is required in many federal posts. (Spanish, however, along with English and French, is also one of the six official languages of the UN.) If this sounds interesting to you, give French a point.

Policy and Activism – Spanish. See the above point: latinxs are heavily underrepresented and are a growing population in the English-speaking world. If you want to get progressive policies installed in the US or Canada, then Spanish will be hugely important for organizing at the grassroots.

Education – Spanish. I can say anecdotally as someone who went to art school (and thus has a million friends who became art teachers all over the US) that no matter what subject you teach, you will be in high demand if you can speak Spanish. Many Latinx immigrant children are adapting to life in the English-speaking world around them. Being able to teach them math, history, or anything else through their own language will not only be enormously helpful to them but an asset to your educational system.

Entertainment and Art – Tie. French films are held highly throughout the world, and operas are still performed in French. Latinx music and influence are on the rise. (But then again, the French rap market is huge and a growing Spanish speaking population in the US could mean the tides change for theatre and film.) This one is a tie.

Tourism and Travel – Both. We’ll get to some of the differences in travel below. But while tourists who visit France spend more than any other country in the world, they’re followed in a close second by Spain. (And when you add Mexico into the mix, Spanish wins.) French tourists also spend more money than any Spanish-speaking tourists. If you really want to work in this industry, actually consider studying both French and Spanish.

For the purposes of this quiz, if your future work industry isn’t listed here, that means there isn’t a particular advantage for one over the other and you can leave this one blank.

5. Do you speak either in your family?

If you have family members who speak either French or Spanish (or if you did to some level when you were younger) there are two things to take into account.

If you’re learning Spanish or French as a heritage language, check out our YouTube channel or subscribe to my email list to learn more about what makes you a special case in language learning (and why you’re not alone). 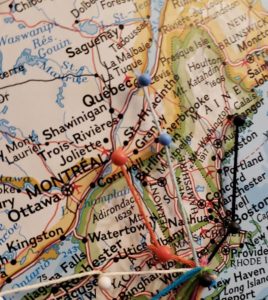 7. Is Spanish or French easier?

If you want to use a language to get a job, travel, make friends, or just generally be a cooler person, this answer does not matter and shouldn’t be counted.

But if you really just need a grade and don’t care at all, here’s the answer to “is French or Spanish easier”:

In general, I would say that Spanish and French are 80% identical in a lot of ways.

The biggest difference in learning them, for me, has been the spelling. So for that alone I would say Spanish is maybe 10% easier.

But this isn’t a big difference. If you like the idea of learning French, then it will be easier for you because you’ll be motivated. That’s why this question is last!

If you want to know more about the difficulty of each language, click here.

So: should I learn Spanish or French?

Do the math on this quiz, but also trust your gut.

Have you come up with more Spanish points, but are suddenly craving French? That might be a good indicator of what you should be really doing.

Did you start thinking you wanted French, but now suddenly Spanish seems like the right choice? You can start exploring both cultures, at least in music and film, for free YouTube. Think of it as a taste test.

There is no right answer to “should I learn French or Spanish”. Follow your gut, and leave a comment below if you want some more feedback!

Tags: french vs spanishquizschoolspanish vs french